Coachbuilders of the 19 teens, 1920s and 1930s created magnificent bodies for the opulent automotive brands of the era. The hood ornaments that perched proudly on these impressive machines were not unlike the ornamentation found on the prow of immense sailing vessels from the beginnings of seafaring transport up until the early 1900s, when wind powered ships were replaced with engine propelled vessels. 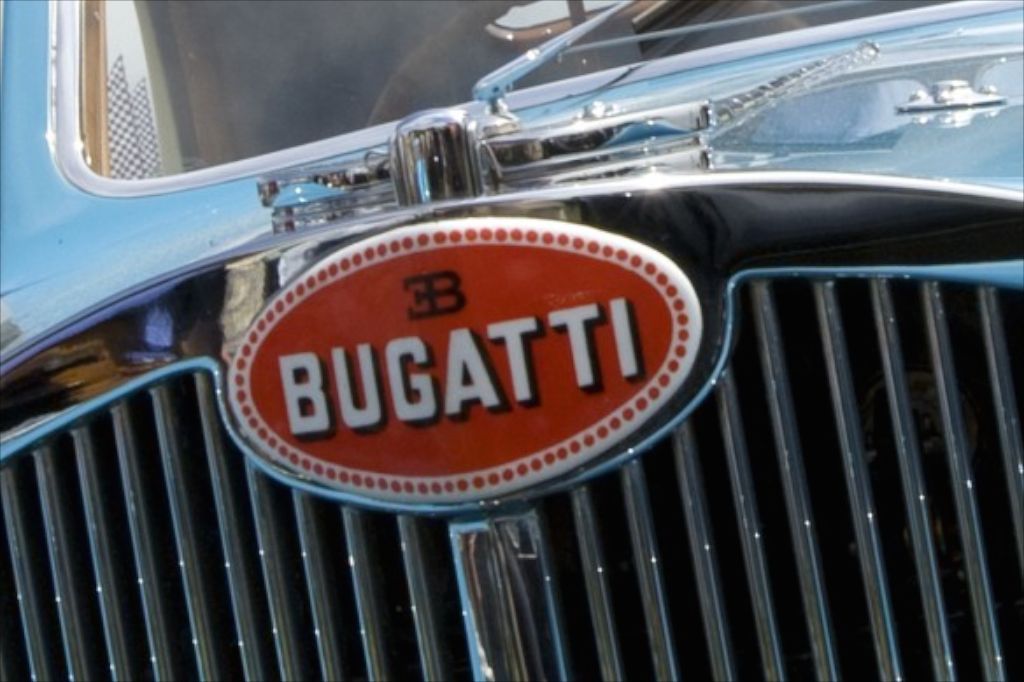 Perhaps the reason why the 1937 Bugatti Atalante Coupe doesn't have an elaborate hood ornament is the fact that the coachwork of the Atalante Coupe is otherworldly in terms of design. The name Atalante is the best indication of the car's origins. Atalante was a huntress in Greek Mythology. Ray Schoor, of Westlake Village, CA owns this particular example, Bugatti badge and all. 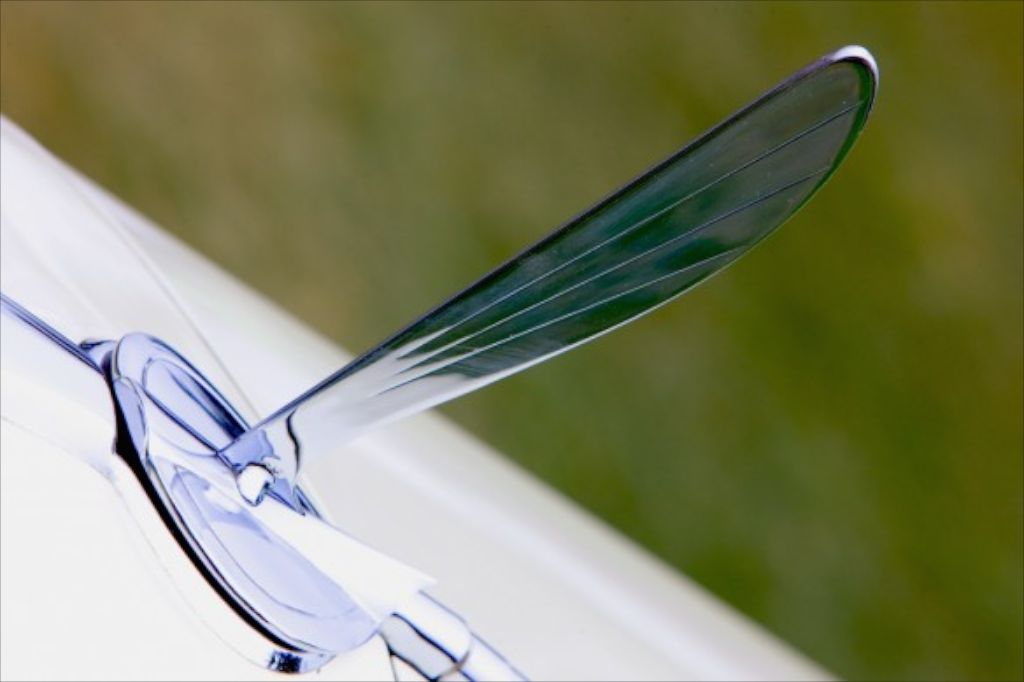 If you guessed that this artful ornament is atop the grille of a 1930 Cord L29 Limousine Body Company Speedster, you were quite correct. The present owners, Ed & Judy Schoenthaler, reside in Oak Brook, IL. You're something of a Cord aficionado, should you also be aware that Cord produced some of the first front-wheel-drive automobiles in the 1920s and 30s. 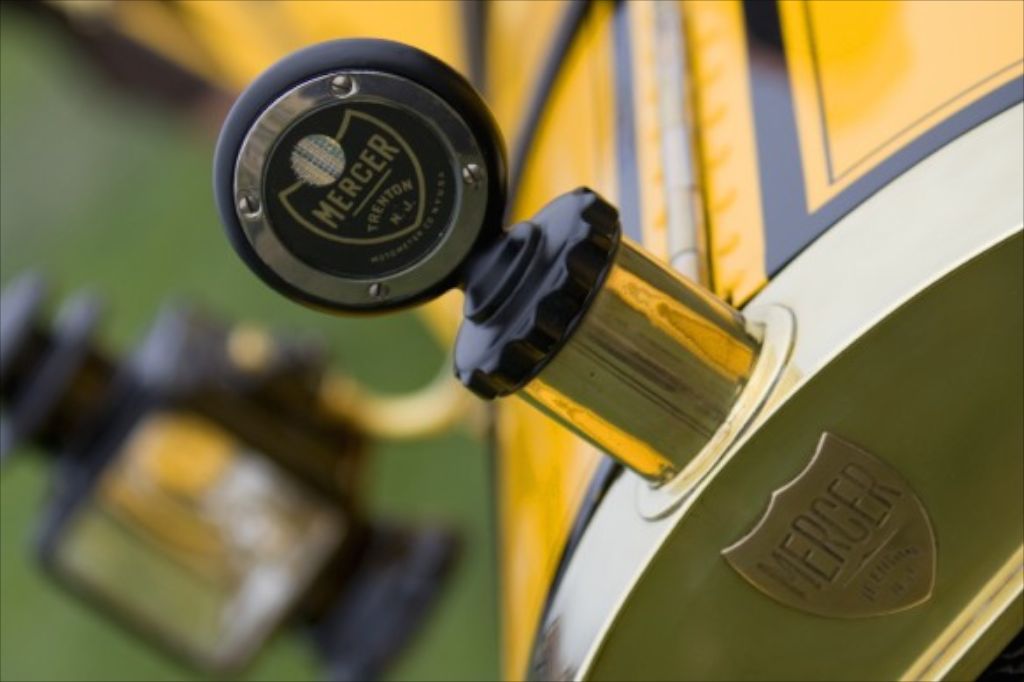 The 1913 Mercer Model 35J Raceabout had a no frills, form follows function hood ornament that revealed where Mercers were marvelously manufactured, Trenton, NJ. It also appears to be a radiator water/coolant tenperature gauge. Mercer Raceabouts raced very successfully for several years against their main foe, the Stutz Bearcat, and held many victories and land speed records in the 19 teens.

As automobiles became more mass-produced, the hood ornaments that once adorned bespoke constructed car bodies became simpler and almost austere by comparison. But, the ornamentation on the front of every automobile from the 1940s to the present day conveys the message that it needs to; it brands the automobile and is instantly recognizable to automotive fans certainly and even most casual car consumers. 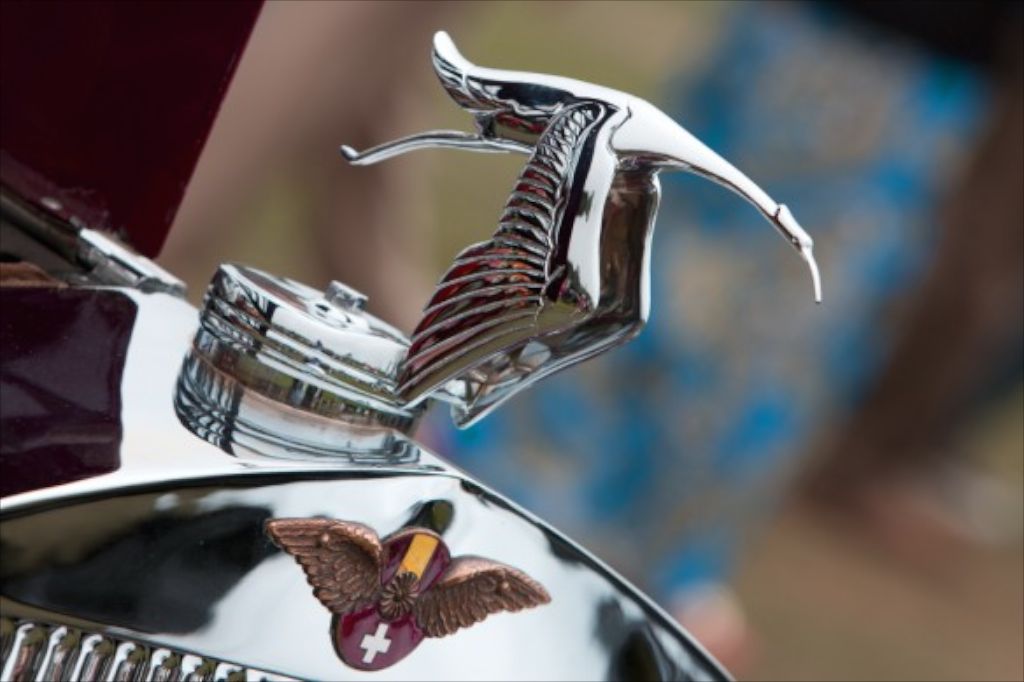 In the 1930s Hispano-Suiza melded Swiss design, French production facilities and Spanish funding to build a full-line of world-class automobiles. The graceful swan ornament is atop an equally elegant 1935 Hispano Suiza J12 Kellner Pillarless Sedan.All J12s were rolling/running chassis and would get custom coachwork, selected by their first owners. Buck Kamphausen & Josh Voss, from Las Vegas, NV are the car's current owners. 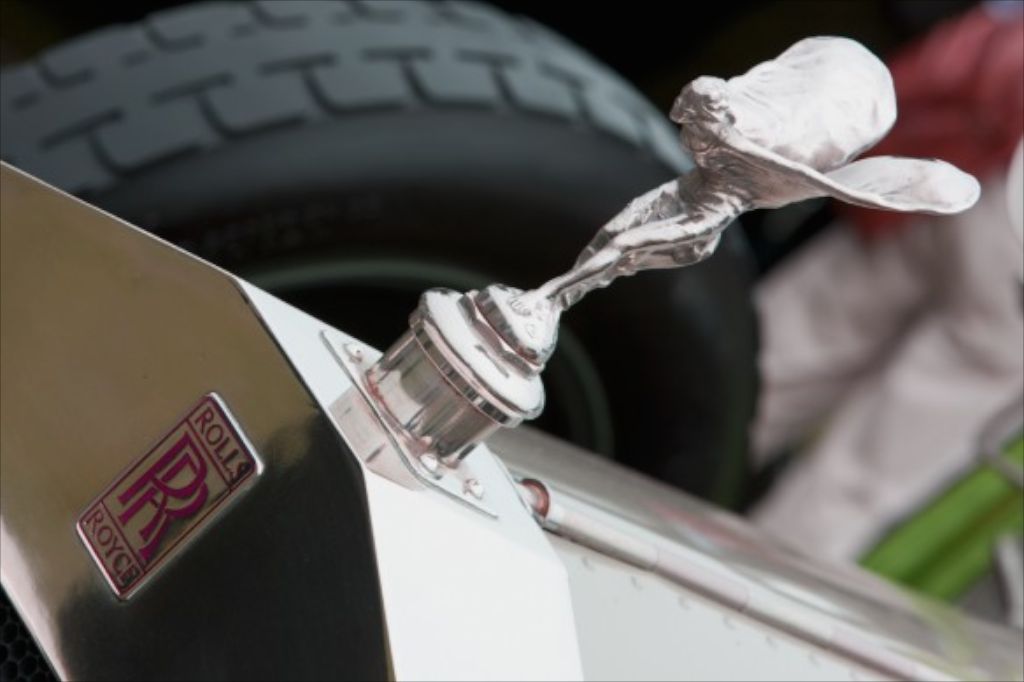 Despite the fact that this hood ornament is on a rare 1920 Rolls Royce Silver Ghost 40/50, the emblem's iconic of the Rolls Royce. One can identify that the statue belongs on a Rolls Royce, which means that this product badge does its job without saying a word. Ronald and Billie Jo Johnson, of Rolling Hills Estates, CA are the owners of this Silver Ghost tourer.

Duesenbergs always had coachbuilt, bespoke bodies. Evangelist M.J. "Father Divine" commissioned coachbuilders, Bonham & Schwartz to build him a 1937 J. Bonham & Schwartz Landaulet Duesenberg J. The car has an enormous 178-inch wheelbase and a motorized throne so that Father Divine could bless his pious (if not misled) followers. The Art Deco inspired geometric hood ornament is austere in comparison to this over-the-top limousine. John M. O'Quinn & Darla Lexington, of Houtson, TX are the Duesenberg's current caretakers/owners. 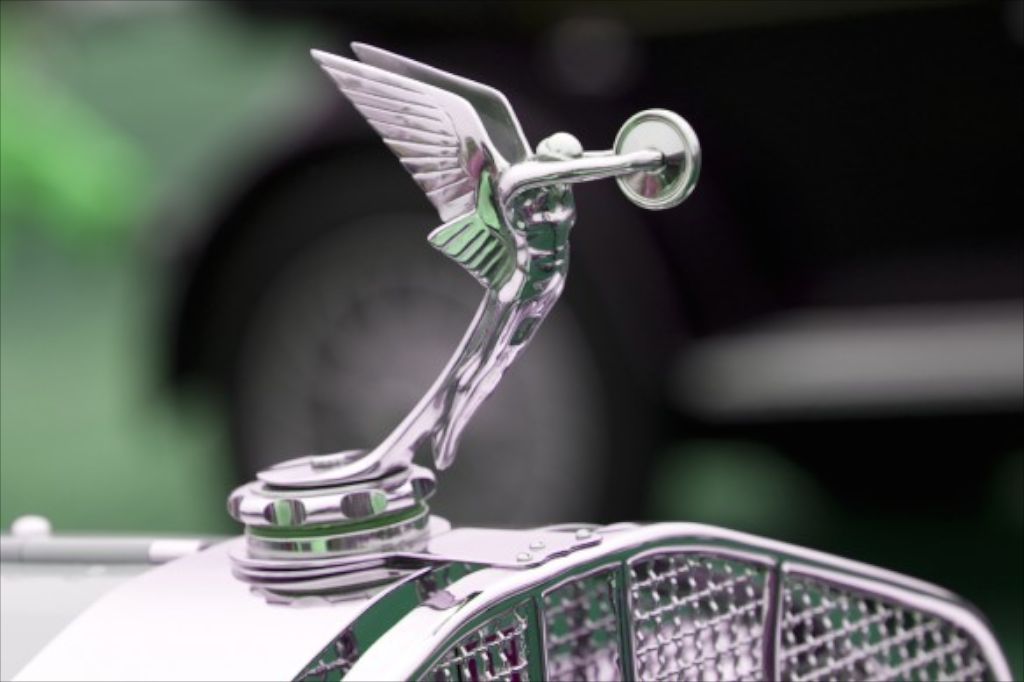 A Tipo 8A SS 1930 Isotta Fraschini Cabriolet, owned by Howard & Madyln Fafard, of Jupiter, FL, has a winged woman playing the cymbals for a hood ornament. Sounds good to us.

Those bespoke vehicles of a bygone era will never be forgotten, thanks to the Concours d'Elegance events that honor such majestic machines all over the world. Expensive automobiles from the coachwork era of the teens, 20s and 30s were rolling sculptures. Having hood ornaments that well fit these opulent vehicles, in terms of style, was not an easy feat to master. All of the examples depicted here had automotive mascots that fit the cars perfectly. 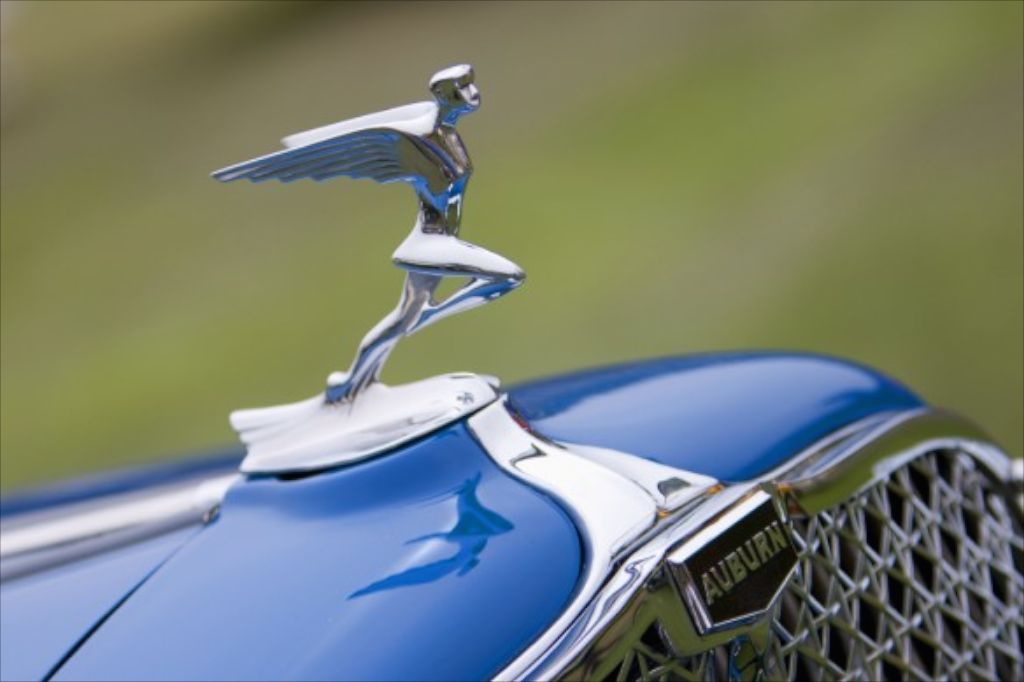 Many luxury brands were more expensive than the cars built by Auburn Motors, but they didn't look any better or perform as well. This elegantly aerodynamic winged woman looks like she can fly. Auburns flew on land, especially ones like this 1932 Auburn V-12 Convertible Phaeton, owned by Lawrence Darcy, of Los Altos Hills, CA. 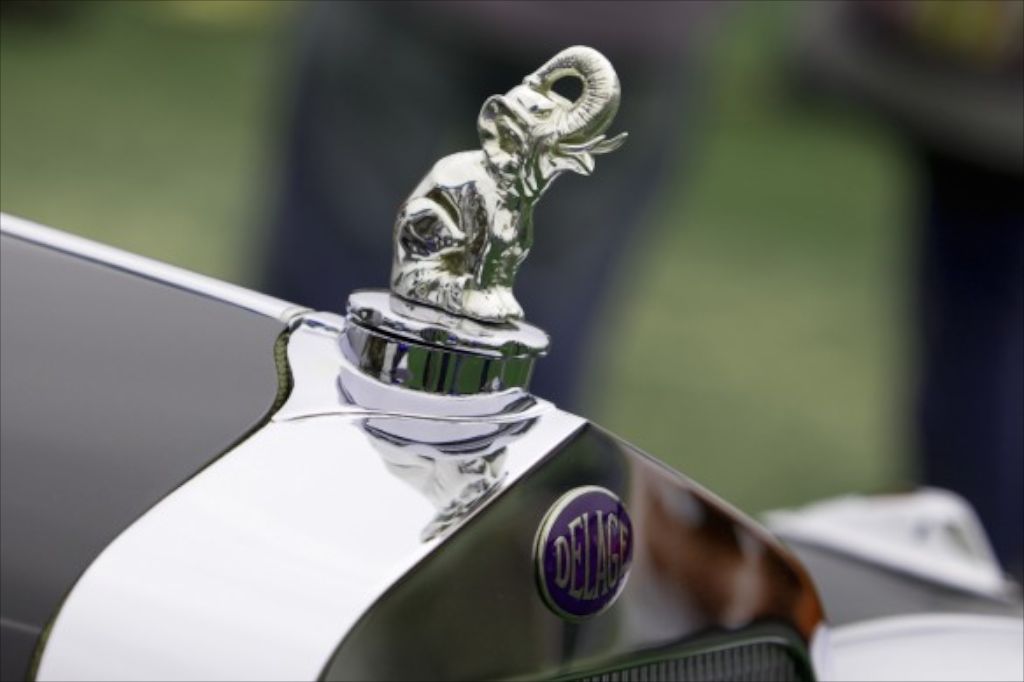 Enjoy the hood ornaments without the beautiful cars getting in the way, and remember that the 2013 Pebble Beach Concours d'Elegance will be here before you know it. Amen to that. 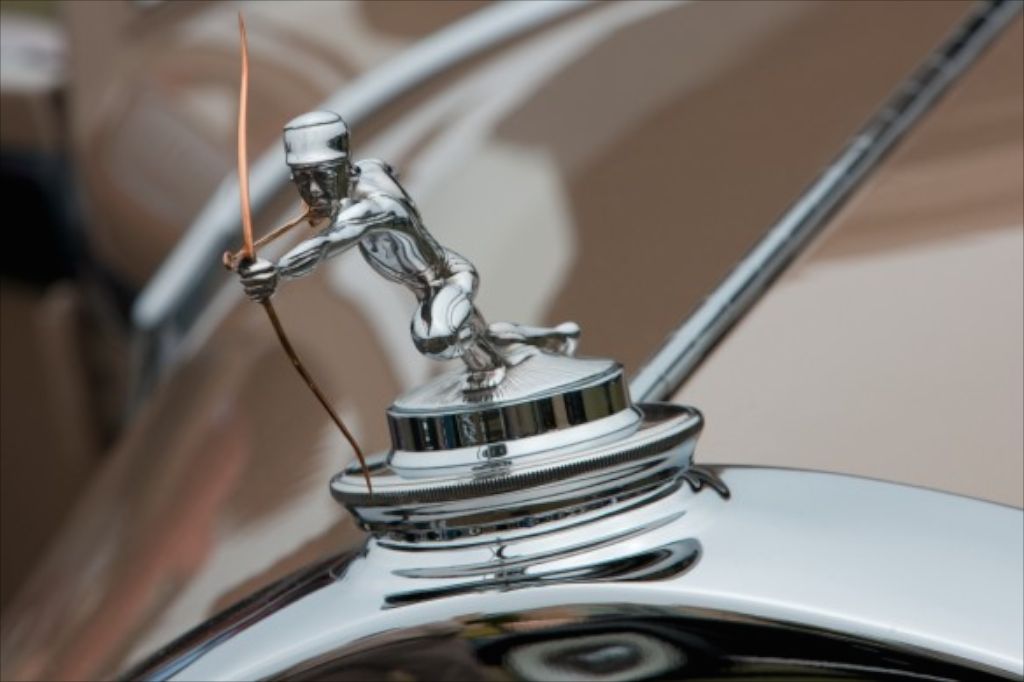 Not surprisingly, the hood ornament that dresses up this 1930 Pierce-Arrow B Waterhouse Convertible Victoria is an archer, who is most focused on his target. Bullseye! Larry & Miriam Waterhouse, of Hilton Head, SC are the proud owners.