Driving up the California Coast in a 2012 Camaro SS Convertible is Monterey Car Week's idea of a great way to evaluate a new American Muscle Car. The purpose of this cruise was to cover Monterey Car Week and to write a review of the Camaro, which in our view is the perfect definition of multi-tasking in muscle car style and panache. 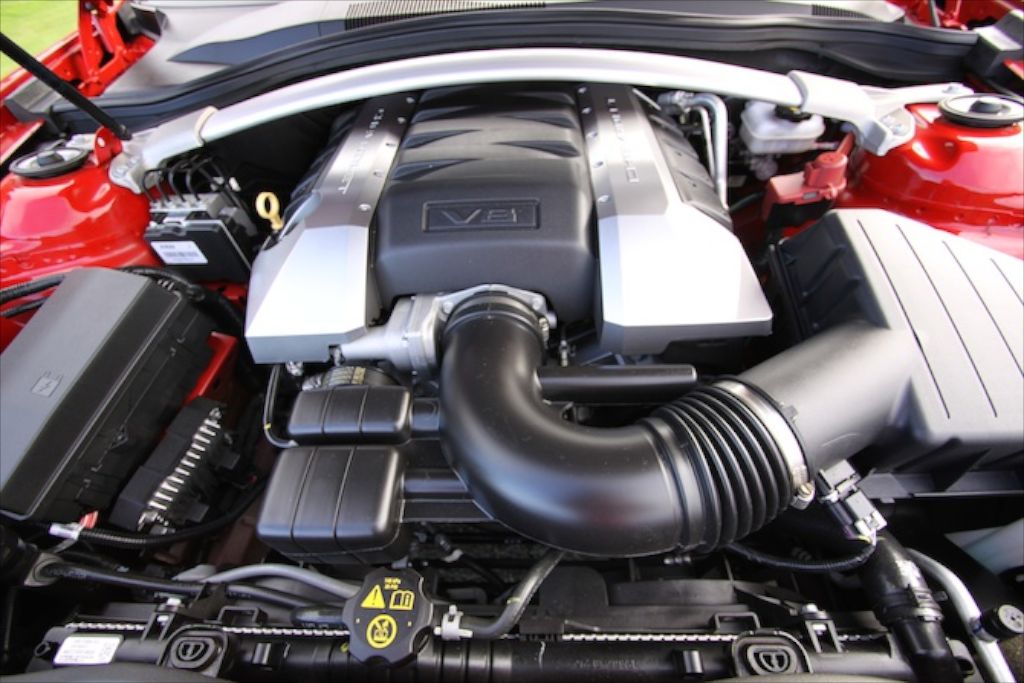 When the all-new Camaro arrived on the scene at RR's west coast headquarters in Oceanside, California, we were happy to see that the Camaro was wearing a brilliant red hue. Redline Review had the first impression that GM's re-introduction of one of the muscle car's that dominated the American street/strip/road course performance scene from the 1960's through the early 2000's was back and better than ever. Still, we had to see for ourselves whether the new Camaro was really a modern interpretation of the truly great Camaro from 1969. Or was it a pretender? 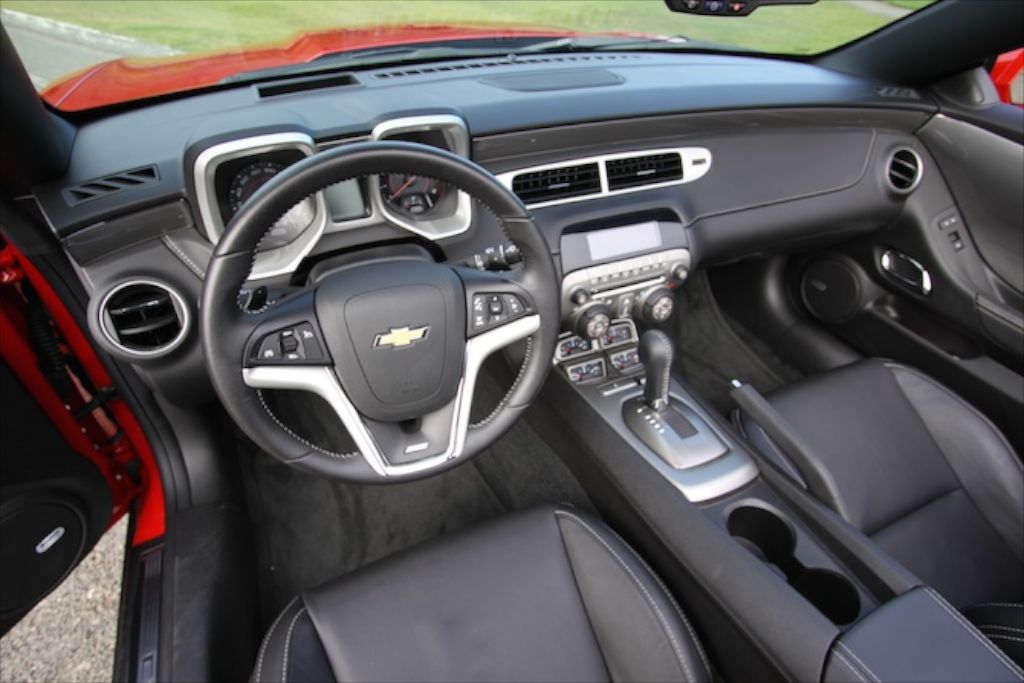 With the two large speedometer and tachometer gauge pods and the angled-to-driver center console instruments, the interior of the '12 Camaro SS ragtop recalls the righteously wonderful '69 Camaros.

The truth is now known to me, a fact that was transmitted directly from this auto enthusiast's right foot, two hands, eyes, ears, nose, and heart and directly to that gray matter within the cranium. Would you like to know it? We thought so.

My road to Monterey began with the securing of several press credentials for all of the events that Redline Review would be covering during Monterey Car Week 2012, which led to also obtaining a press car from General Motors, in the form of this Redline Review Red 2012 Camaro SS Convertible. Mind you, the color's not really listed as Redline Review Red in the Camaro Brochure. General Motors would have to pay us some sort of sponsorship money for such an alliteratively rich name. 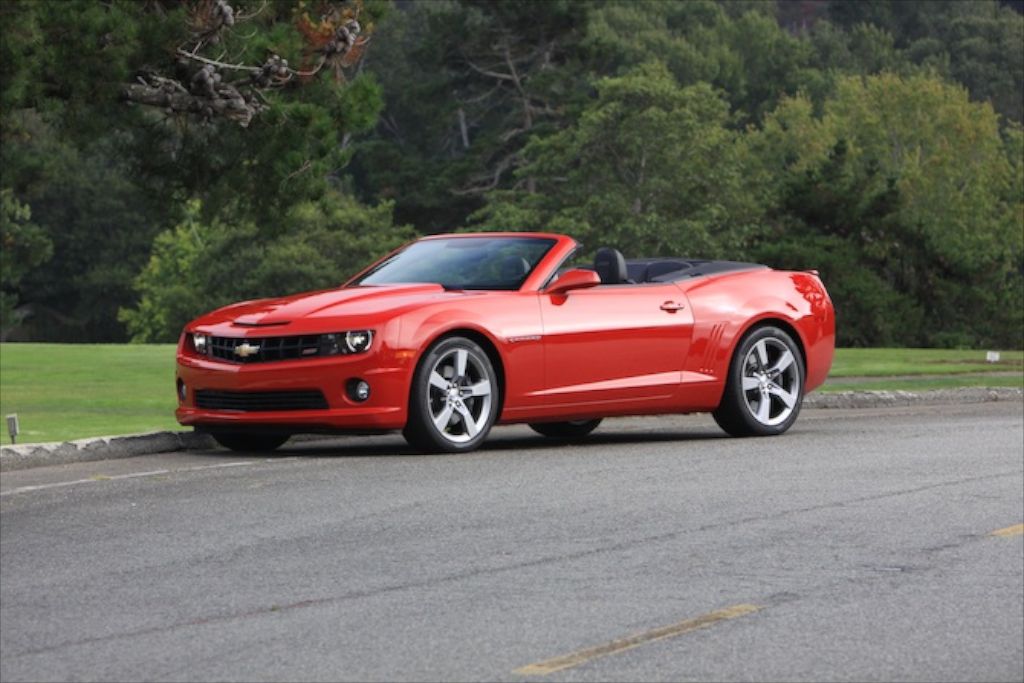 Like most drop tops, this Camaro puts its best appearance forward when the convertible top is neatly folded in place. A nice, easy-to-install friction fit vinyl boot cover goes over the top, if the driver's not too lazy to take a minute and install it that is.

We took delivery of the Victory Red 2012 Camaro on the Friday before Monterey Car Week, as I would be driving north the next day to get to Carmel on Saturday. Redline Review's first unofficial automotive event was the Monterey Pre-Historics vintage races at Mazda Raceway Laguna Seca. The Pre-Historics are a sort of warm up for the actual vintage races that take place the following Friday, Saturday and Sunday towards the end of Monterey Car Week. 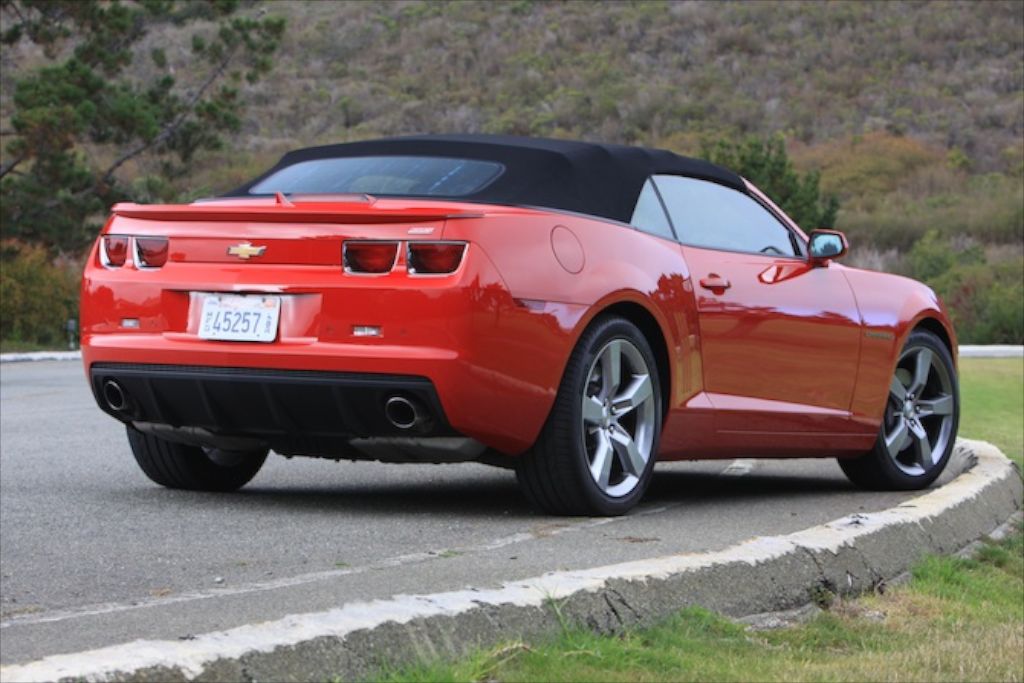 A defrostable glass rear window is an appreciated standard item on all 2012 Camaro Convertibles.

Driving to Monterey in a  new racy red convertible that has a 6.2L V8 and rear wheel drive is much more enjoyable than piloting my daily driver, a vehicle that's sporty but sports 140,000 miles on the odometer and has a broken air conditioning system. The course north was memorable for two items. Traffic was a bear, for one. Number two was a real positive. The SS Camaro Convertible has instantaneous and abundant power on tap from the millisecond the driver thinks about increasing throttle pressure with the right foot.

If you have driven on Highway One in Santa Barbara, you probably remember the part of the freeway where you're in the fast lane headed north. All of a sudden the fast lane ends and merges down into three lanes from four. Well, Redline Review's humble scribe, namely me, was listening too intently to the wonderful XM Radio station to notice that there was a car right alongside our Victory Red SS roadburner. Without a second thought, I put the go pedal a might bit closer to the carpet. That mighty Camaro came to attention and roared in front of the outmatched driver/car the next lane over. The power delivery is instantaneous, my friends. In fact, the way I became pinned in the driver's seat with the additional G-loading to my body, I thought to myself, "Man, this thing must have a big four-barrel carb atop that 6.2L V8." Then I remembered what century we're all in. The days of my well-spent youth piloting Pony Cars and Muscle Cars might indeed be back again with the all-new SS Camaro Convertible. 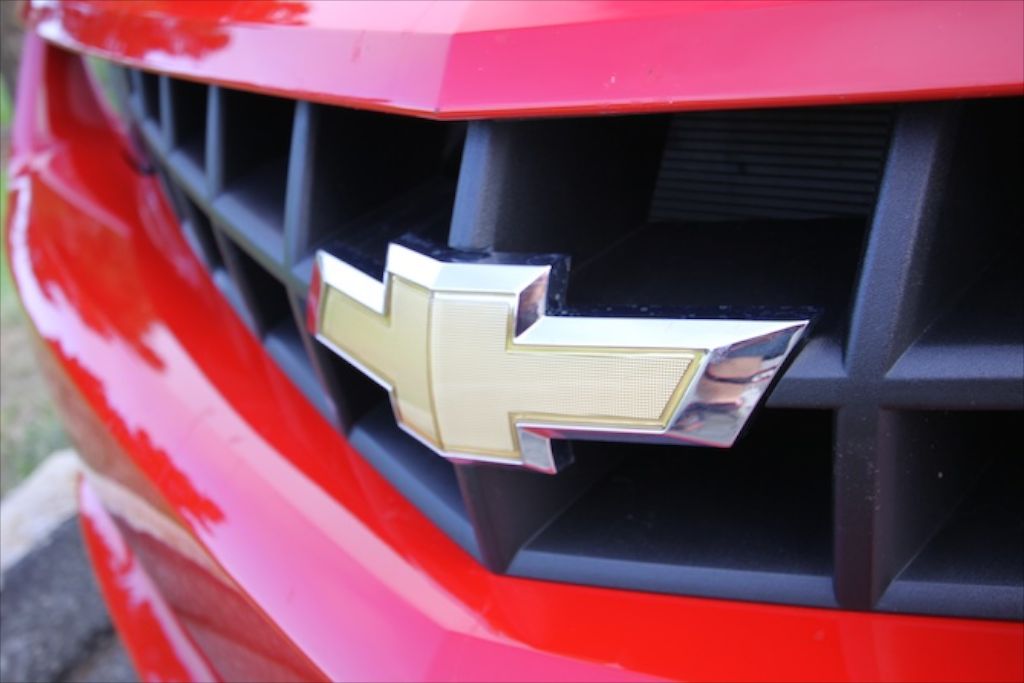 Chevrolet has a big winner on its hands. The Camaro SS Convertible is sublime.

In reality, the 2012 Camaro SS Convertible is light years better than any muscle car I ever drove in the late 1970's and '80s. To begin with, I never had a muscle car with air conditioning. Nor were my ragtop muscle machines without cowl shake and frame flex like this '12 Camaro SS Convertible is. It's every bit as solid as a  modern luxury hardtop coupe, and it isn't just fast in a straight line like those Roadrunners, Camaros, GTOs, Challengers, Mustangs, Firebirds, and etc, were from the glorious 1960s.

What's even a bit disconcerting about the new Camaro is that, when you're driving, the cockpit has gauges and a center console pod of aimed-to-the-driver instruments very reminiscent of the Camaros from the '60s. 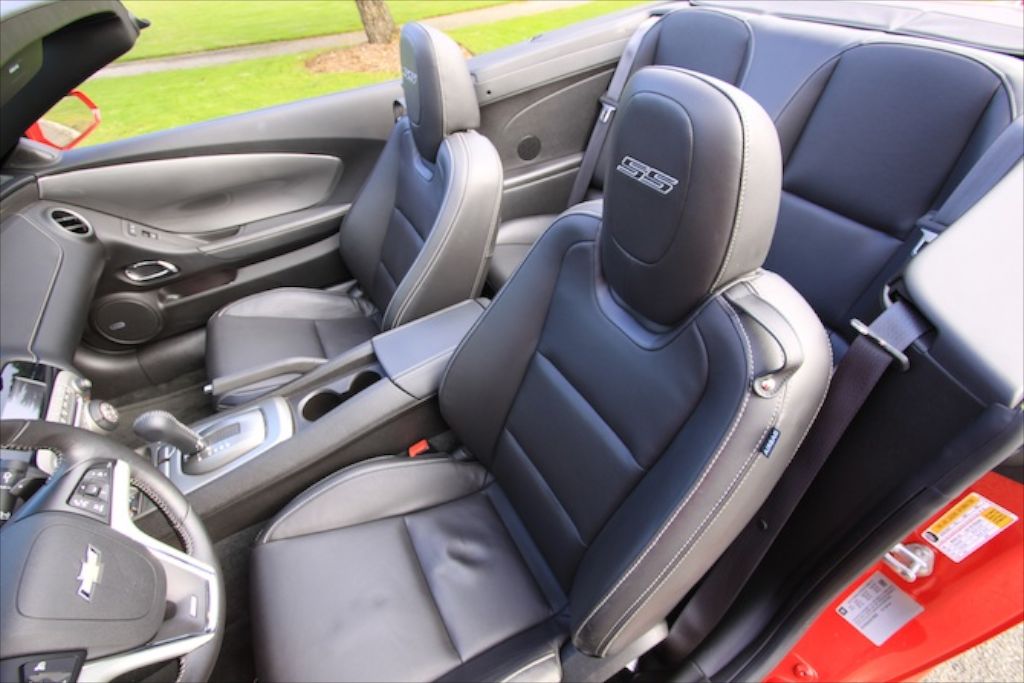 I never owned a '60s era muscle car with leather seats. These are as comfortable and supportive as they look, which is to say that they're excellent in the front.

It certainly has prodigious V8 power that's akin to what was on tap in the original Muscle Car Era. But, the deal quencher is that this new SS Camaro can carve up corners with the likes of and keep up with modern day super cars. 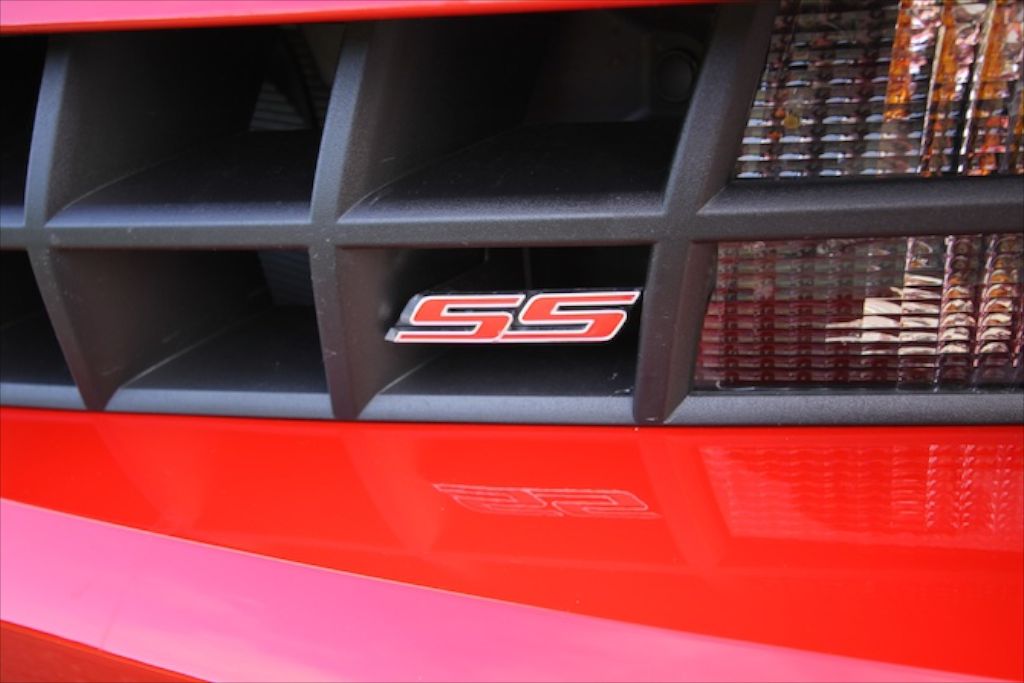 Like the SS Camaros from the swinging 1960's, the new Camaro SS wears the badging proud.

I know this for a fact, because I drove back to the hotel from a Monterey Car Week event with the top down and the stereo turned up to full throat, and I kept up with a trio of  2012 Lotus Evoras that were dispatching a bunch of corners with ease. I did this without any sort of stress level on my part, as well as that of the Camaro and just a modicum of tire squeal from the 20-inch high performance tires. So yes, the new 426 horsepower, 6.2L aluminum V8 powered Camaro can thrust the rather heavy SS drop top quite readily in a straight line. Yet, this new SS can also handle the twisty bits, thanks to an all-independent front and rear suspension equipped chassis. And it can stop better than any Camaro before it and we're sure every muscle car from the 1960s, given the fact that the SS has Brembo high performance disc brakes at all four corners.

This modern Camaro may have retro-forward styling that has styling cues from the unsurpassed '69 Camaro, but it's so far superior to the glorious muscle cars of the 1960's; it's not even funny. A car enthusiast would have to be so mired in the past to think that the first iteration of the Camaro could be the better of the beasty beauty that Redline Review drove throughout Monterey Car Week 2012. 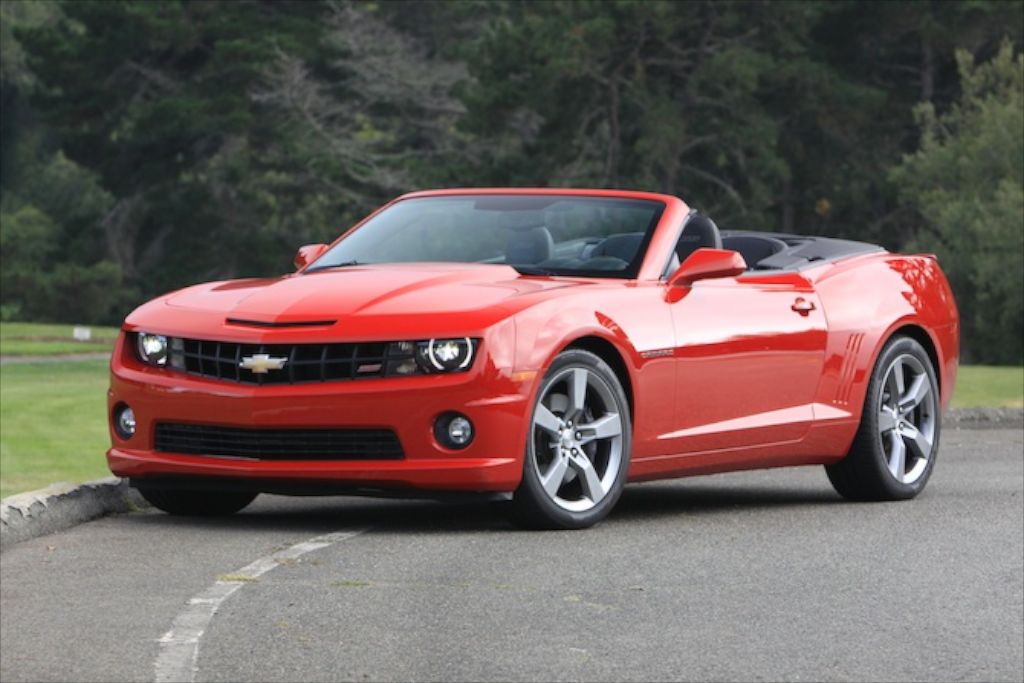 The high intensity discharge with LED halo ring headlamps are great looking and very bright in the dark.

The paddle shifters achieve crisp and precise up and downshifts with a gentle flick of the fingers. That six-speed automatic transmission is smooth and swift. Coupled to the massively torquey 6.2L aluminum V8, there's ample power available to the driver no matter what gear the car happens to be in at the moment, and it can be all automatic anyway, so there's no need to worry, if you don't wish to paddle through the gears yourself.

When we were traveling midweek from the host Hyatt Regency resort to the train station to pick up my Dad about sixty miles south east of our Carmel location, the OnStar system came in most handy. I had printed out some Google Maps directions to get to the tiny train station. Regrettably, Google Maps got me lost. A quick call to OnStar and a helpful human told me exactly how to get back on track and on time to pick up my Dad, the elder auto enthusiast and big reason why my brother Kevin and I love cars so much. Google Maps had actually gotten me so lost that I drove on a really rutted dirt road for 11 miles. Despite the rough surface, the SS Camaro negotiated the off road excursion with the sort of confidence that the original Rebel E. Lee Dodge Charger in the Dukes of Hazzard TV show muscle car could only dream about having. 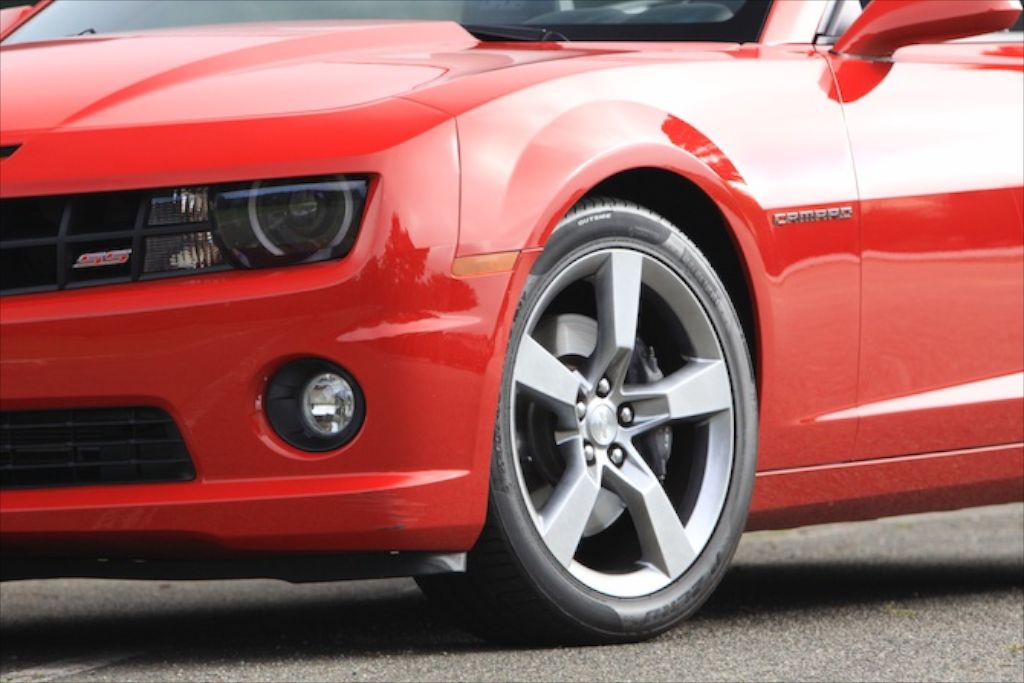 Rolling stock consists of front and rear 20-inch Midnight Silver painted five spoke aluminum wheels. In other words, five spoke mags have a timeless look on any American Muscle Car, even one from 2012.

Since our temporary Redline Review company car SS Camaro Convertible had to be back in Los Angeles for the next automotive scribe to drive and evaluate the Monday just after the Pebble Beach Concours d'Elegance, Dad and I made haste back to So Cal in the Camaro and made near record time. In overall driving the SS achieved an as estimated 18 miles per gallon in mixed freeway/around town driving. If I were in the market for a new automobile, I would take a hard look at the Camaro SS Convertible. Especially with a manual transmission, the SS drop top would make a most righteous daily driver. Mine might either be black over red, all black or possibly some deep navy blue hue. Regardless of the color, GM and Chevrolet have managed to bring back the Camaro better than its ever been before. It's the perfect machine for anyone who has a passion for modern day American Muscle Cars. We encourage you, in fact, to visit your local Chevy dealer and see if you don't agree by taking an SS drop top out for a spin. We think you'll be glad you did, so much so, it might be your next new car.