Editor’s Note: We love the Mercedes Benz 540K Cabriolet, Roadster and Phaeton automobiles of the mid-1930s. Thanks to RM Auctions for permitting Monterey Car Week to publish the great article and beautiful photos for this stunning Benzo that will be going up for bid at the January 2015 RM Auctions event in Arizona. 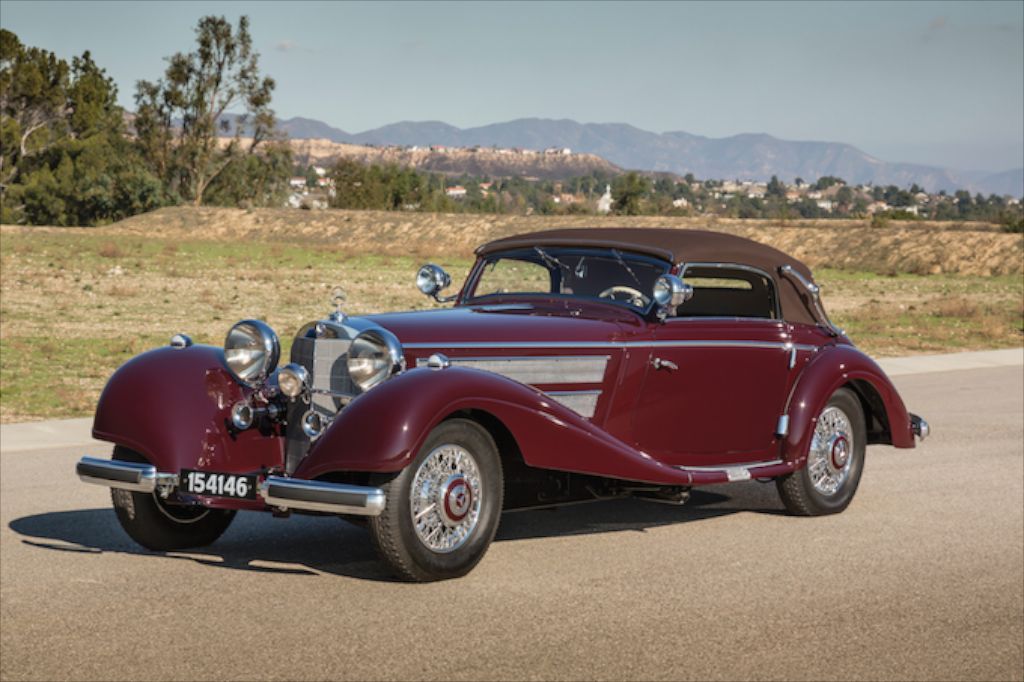 Mercedes-Benz’s success with the 500 K was aided by the continuing defaults of its sporting luxury competitors, as the Great Depression worked its way through the ranks of society, politics, royalty, and finance. In 1936, the company followed up on that success with the 540 K. The 540 K was regarded by many, and respected by all, as the high point of the Classic Era among German automobiles, and it reflected the restless pursuit of perfection by Mercedes-Benz’s engineers, technicians, and craftsmen and the coachbuilders of the Sindelfingen Werke.

The Mercedes-Benz 540 K body style of the type offered here, officially called a Sport Cabriolet A, was best described by Dennis Adler in an article for the October 1989 issue of Car Collector as a “styling bridge between Mercedes’ more formal Cabriolet designs and the sportier 540 K Special Roadsters.” Most notably, it has the desirable feature of the radiator, and consequently the entire drivetrain, being set back behind the front axle, enhancing the look of the long-sweeping front and rear fenders, which are similar to those found on the roadsters, except for the lack of chrome adornment. The spare tires are contained in a recess in the rear of the body, while a set of Karl Baisch luggage rests on a shelf behind the front seats, to compensate for the space lost by the lack of a traditional trunk. A lower top completes the sleek look of this automobile.

Fortunately, the offering of this car is accompanied by a copy of its kommission paper and its related excerpt from the karosserie buch, which together detail the story of its delivery. In late 1936, this Sport Cabriolet A was ordered by Miss Martha Jordans and recorded under kommission number 228752. Subsequently, the bare chassis that was assigned to the order, 154146, was delivered by the Stuttgart factory to the coachworks at Sindelfingen on November 16, 1936.

Interestingly, the documentation suggests that Miss Jordans placed this order in Paris, although the car was actually delivered on February 12, 1937, to her German home on Albertusstrasse in Mönchengladbach via Daimler-Benz Düsseldorf. Jan Melin’s first volume of Mercedes-Benz 8: The Supercharged 8-Cylinder Cars of the 1930s indicates that a total of 83 Cabriolet As of all the styles were built on the 540 K chassis, and it further defines that only 32 of this version, which was introduced in 1936, were constructed. Of additional importance is a handwritten note on the excerpt from the karosserie buch, which indicates the production of only 10 bodies of the 826200 series, and this car, body number 826201, is the first of this series.

Miss Jordans reportedly later immigrated to the United States, bringing her attractive Mercedes-Benz with her. It can certainly be said that her car has always been well looked after, as it had been in collector hands since relatively early on in its life, beginning with car collector Paul Hauck, of Union, New Jersey. In the Spring 1957 issue of The Classic Car, the car is pictured wearing a pre-1956 New Jersey license plate. It was owned by Hauck until at least 1965, when it was pictured on page 220 of Jan Melin’s second tome on supercharged eight-cylinder Mercedeses.

In 1989, the 540 K, which was in the ownership of American Mercedes-Benz enthusiast Tom Kreid, was featured in an issue of Car Collector. According to Adler’s article, chassis number 154146 previously spent time in San Francisco during the 1970s, and it also spent five years in Colorado. In 1996, it returned to Germany under the ownership of Alfred Richter, of Lampertheim. Mr. Richter found this Mercedes-Benz to be a wonderful driving car, reportedly driving it on several rallies and accruing nearly 30,000 kilometers on the odometer before passing it to the current owner a few years ago.

Upon acquiring the car, the owner, a long-time Mercedes-Benz enthusiast and Pebble Beach entrant, commissioned Mercedes expert Jim Friswold, of Tigard, Oregon, to perform a complete concours-quality restoration. After the removal of the body, the chassis was stripped to bare metal and powder-coated and the suspension was fully rebuilt. The transmission and rear end were completely disassembled and had new bearings and seals installed, while the engine was checked and found to be in excellent order, having been rebuilt by Reifen-Wagner, of Landshut, Germany, under Mr. Richter’s ownership.

The cosmetics were given an equally thorough treatment, with all chrome being replated and the body being stripped and refinished in the highly attractive Burgundy color it now wears today. The interior restoration was equally fastidious: the old upholstery had been replaced with Biscuit Tan leather, all of the wood was beautifully refinished, and all instrumentation was fully rebuilt. The leather was of the correct and very high quality German material, as was the material used for the top and headliner. The work was completed in June 2014, and the car’s overall presentation can only be described as “crisp,” just as a restoration that is now only six months old should be. Chassis number 154146 was presented at the 2014 Pebble Beach Concours d’Elegance, placed behind an imposing 770 K and a coachbuilt 630 K.

The operation of this car is described by the owner as “like a Swiss watch,” and it has been driven only 100 miles since completion of the restoration. The sale of this exquisite and beautifully presented 540 K is accompanied by receipts and photographs of all work carried out, as well as reproduction owner’s and parts manuals.

This Sport Cabriolet A, wearing the most desirable of the cabriolet body styles, was deemed by Car Collector as “almost a Special Roadster.” It is a rarity that is fit for the astute connoisseur of pre-war classics, and it likewise presents an opportunity for a serious entree into the pre-war arena.