The Pebble Beach Concours is held each year on the third Sunday in August. The world's greatest Concours fields an eclectic, hand-picked and wonderful collection of  automotive and two-wheeled motorized masterpieces from disparate parts of the globe.

In 2011, the 61st addition did not disappoint. Of the 10 or so Pebble Beach spectacles that Redline Review has witnessed and covered, this was the most amazing. Why was this so, you may ask. The answer is in the sum total of all that comprises this epic vintage automobile and classic motorcycle show. All of the motorcycles and cars that were selected to participate in the 2011 Pebble Beach Concours best represented their respective marques, whether they were nut and bolt body-off restorations or selected vehicles that were survivors in the Preservation Class. There were 227 automobiles exhibited along the greens of the impeccable Pebble Beach Golf Course, and every single one of them was worthy of being in the competition. 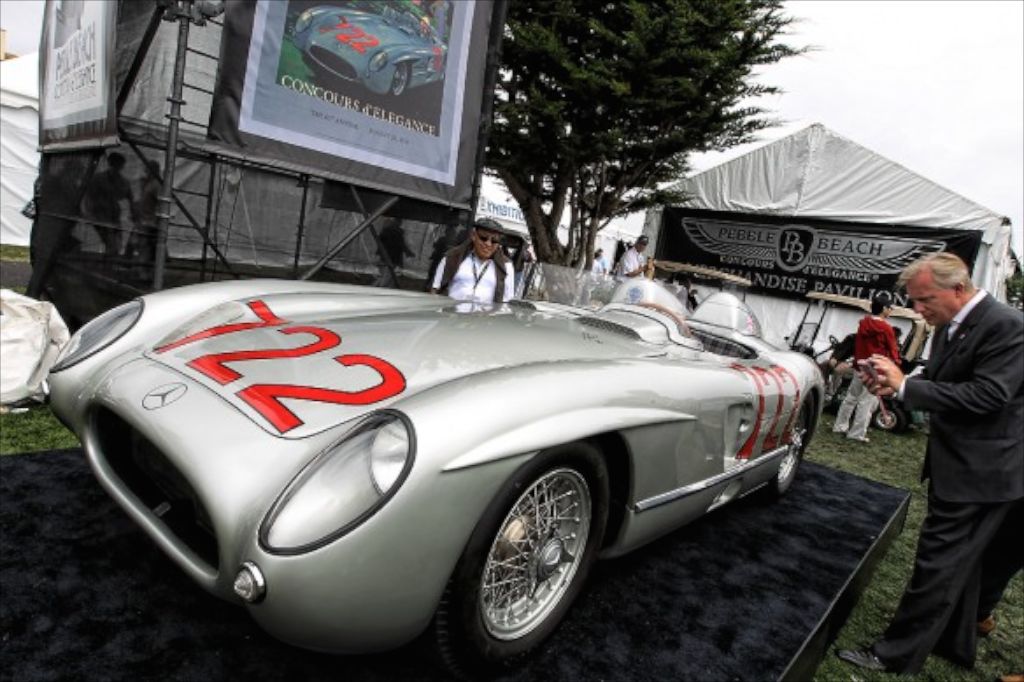 Automotive birthdays are always celebrated at Pebble Beach. A total of 21 Ferrari 250GTO's glorified the Pebble Beach greens. Just 36 were originally constructed some 50 years ago. Having 21 on hand was a fitting 50th anniversary celebration.

Mercedes Benz, named Daimler Benz at its inception, had 40 cars on exhibit, which was a good tally considering the regal automotive marque has been around for 125 years. As in years past, right down the road from the show field, Mercedes Benz had its exceptionally well-curated exhibit of noteworthy Daimler/Mercedes Benz automobiles from its glorious past right up to the present day. 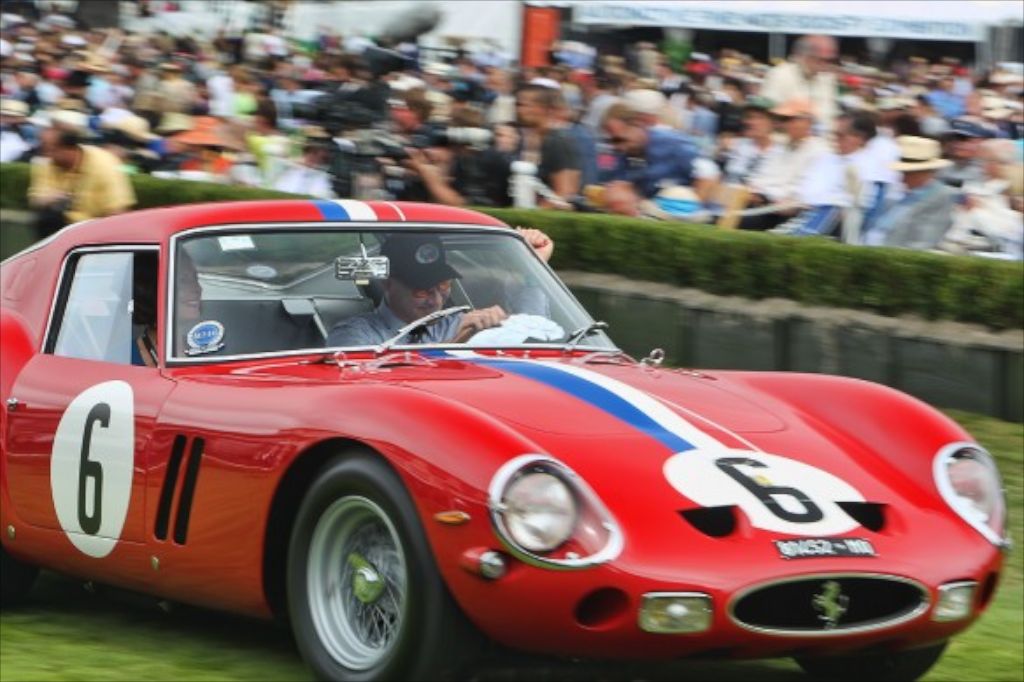 Celebrating a marque that no longer exists, but is one of the greatest classic automotive brands from the coachbuilt days of the 1920's and '30's, Stutz showed off 27 vehicles to honor the manufacturer's centennial. 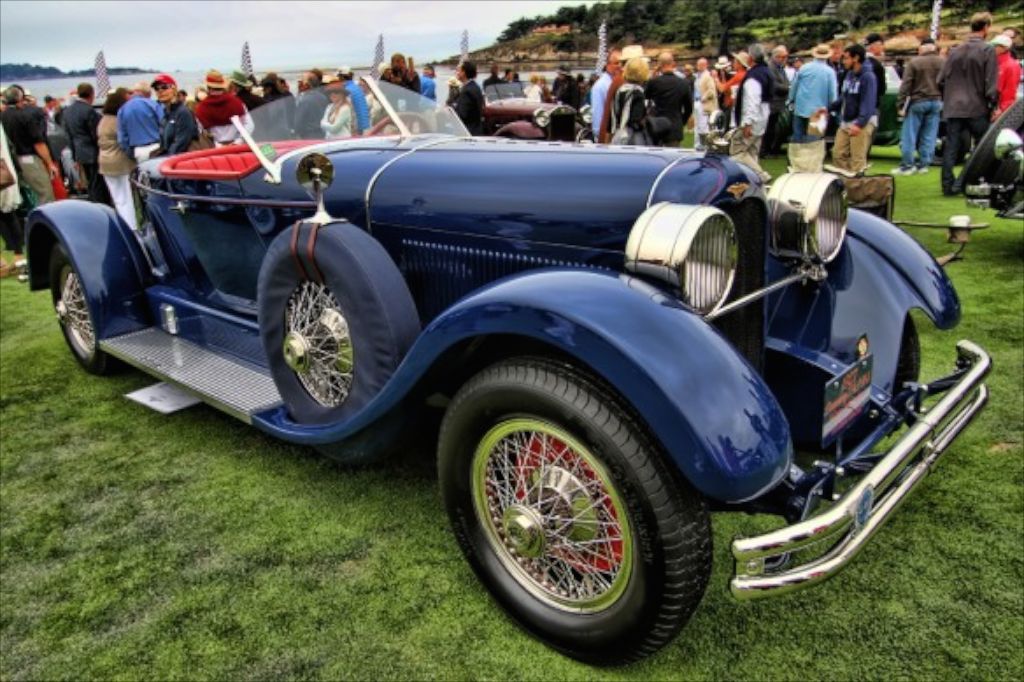 The boattail speedster coachwork on this 1927 Duesenberg X McFarlan Roadster was borrowed by little sister company Auburn from 1928 onward, as Auburn began manufacturing its famous boattail speedsters. Not many Duesenbergs were produced on the Model X chassis, which is just one of many distinctive features on this most noteworthy Duesey. Peter Heydon, of Ann Arbor, MI is the car's current caretaker.

Of course, many of the prominent new luxury, exotic and supercar manufacturers proudly displayed their new machines, along with a few hand-picked historic cars in the manufacturer's pavilion. Prototypes and soon-to-be released new models were reserved for the concept lawn, right in the middle of the Pebble Beach Golf Resort on what is normally the practice putting green for PB Golf Club duffers.
With cars and their caretakers converging on the Pebble Beach Golf Course links from 14 countries, the District of Columbia, 30 states and the principality of Monaco, the Pebble Beach Concours d'Elegance is indeed a worldwide vintage automobile and motorcycle show that has earned its reputation as being the best from the passage of time, some 61 years of time to be exact. The producers of the Concours pay attention to all the details. There are a series of related events that always build the anticipation of the climatic Concours. The Pebble Beach Tours d'Elegance, the Pebble Beach RetroAuto, and the Pebble Beach Auctions presented by Gooding & Company all enhance the impact of the mack daddy Pebble Beach Concours d'Elegance, where the greatest cars gathered together on earth each vie for the Best of Show and the other prestigious awards that are all well earned. 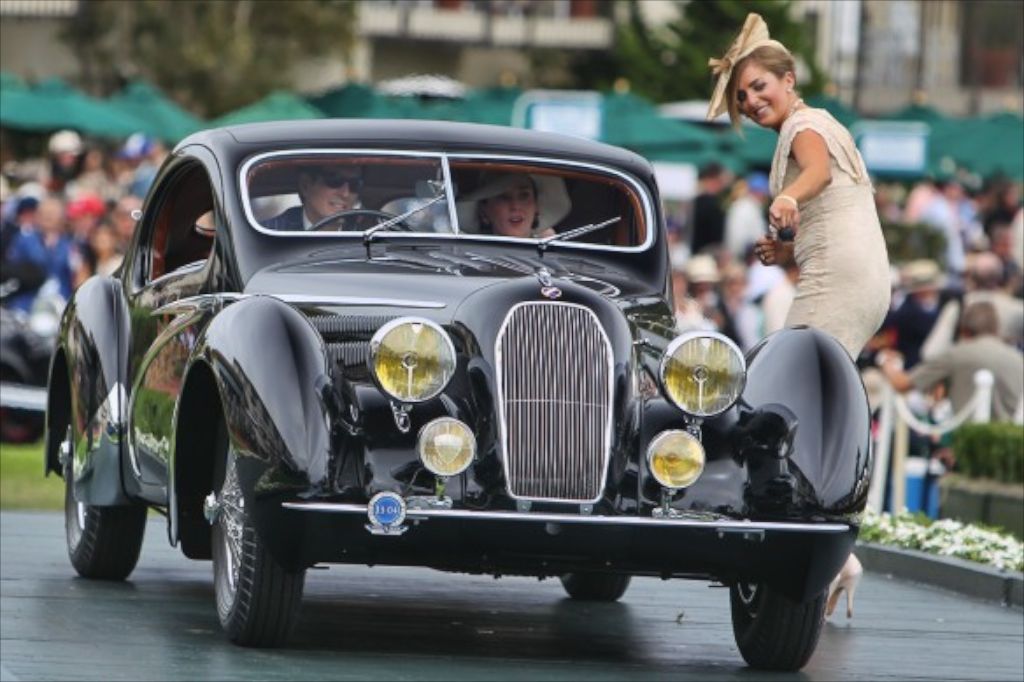 This year's winner belonged to Peter and Merle Mullin from Los Angeles, CA. The Mullin's exhibited their exceptional 1934 Voisin C-25 Aerodyne. The Mullin's Voisin is a four-door sedan, just the sort of body type that typically doesn't garner much attention at any Concours. Roadsters, phaetons and convertibles are the sort of drop top machines that usually get all the acclaim. But, this particular Voisin was restored so painstakingly well that it could not go unnoticed by the Pebble Beach Concours Judges. Peter and Merle Mullin have shown cars at Pebble Beach for 27 years. Their Voisin is the couple's first Best of Show winner. Hearty congratulations to the Mullin's for their persistence and for preserving this wonderful French automobile with the Art Deco and aeronautical-inspired design and engineering. 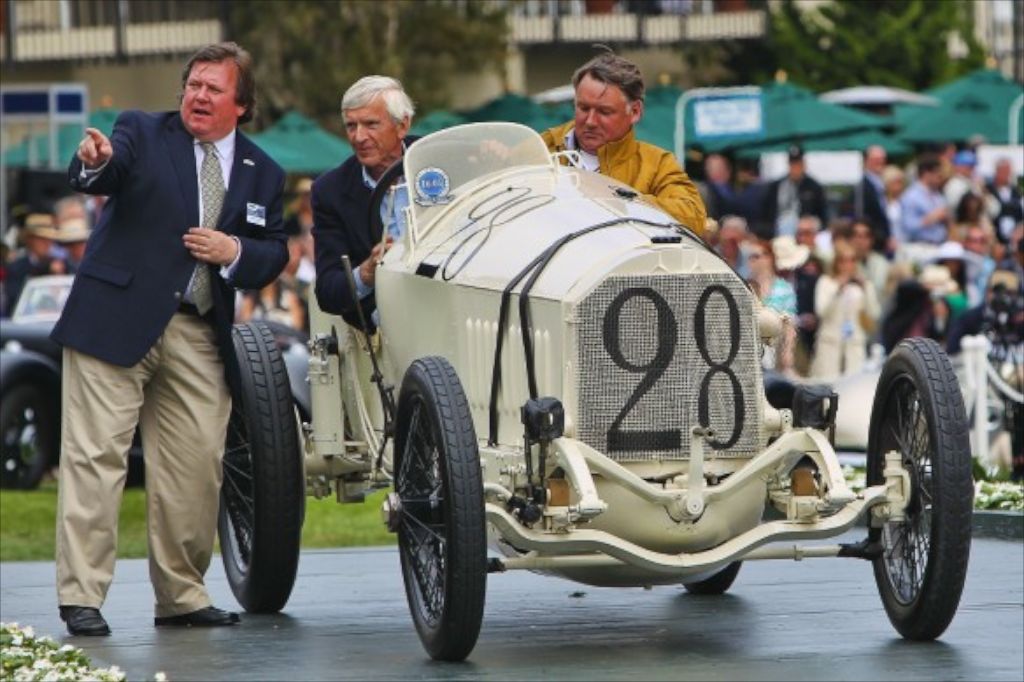 Peter Mullin is a French car enthusiast. His collection of classic French automobiles, from Voisins to Delahayes to Delages and everything in between is well known in the car collector hobby. He recently opened an appointment-only classic car museum in Ventura, CA that houses some of his collection.

Over the years, the Pebble Beach Concours d'Elegance has raised more than 14 million dollars for various deserving associated charities. In each of the last six years, the PB Concours has raised better than one-million dollars a year. In 2011, $1,154,778 was raised, which benefited the following charitable organizations: United Way Monterey County, Pebble Beach Company Foundation, and Boys & Girls Clubs of Monterey County. 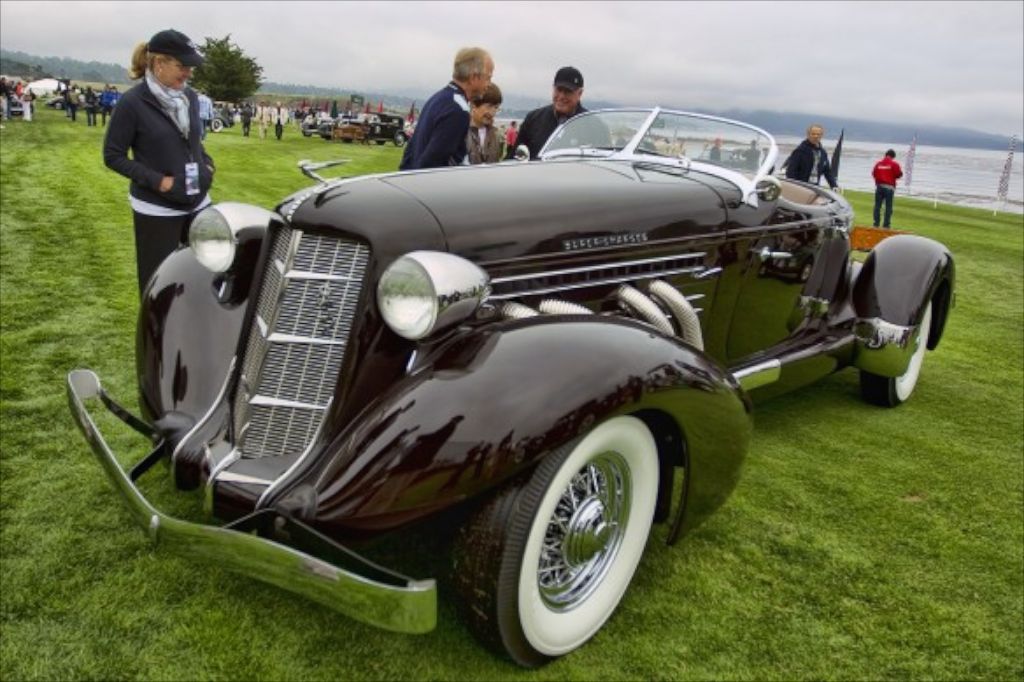 The author's Uncle Phil had an Auburn Boattail Speedster with a Lycoming straight-eight engine and supercharger just like this one, right before he went off to fight in World War II.

The crew of Redline Review sees the Pebble Beach Concours d'Elegance as the pinnacle of the best week of car worship for the entire auto racing and car show season. We endeavor to make our annual pilgrimage to Monterey, Carmel and Pebble Beach for Monterey Car Week every year. Like the organizers of the Pebble Beach Concours d'Elegance, our overriding goal is to provide better coverage every year. Given this aim, we believe you'll enjoy all the following photos and captions even more than what we've provided in past years. Please feel free to provide us with your feedback at DBS@RedlineReview.com. 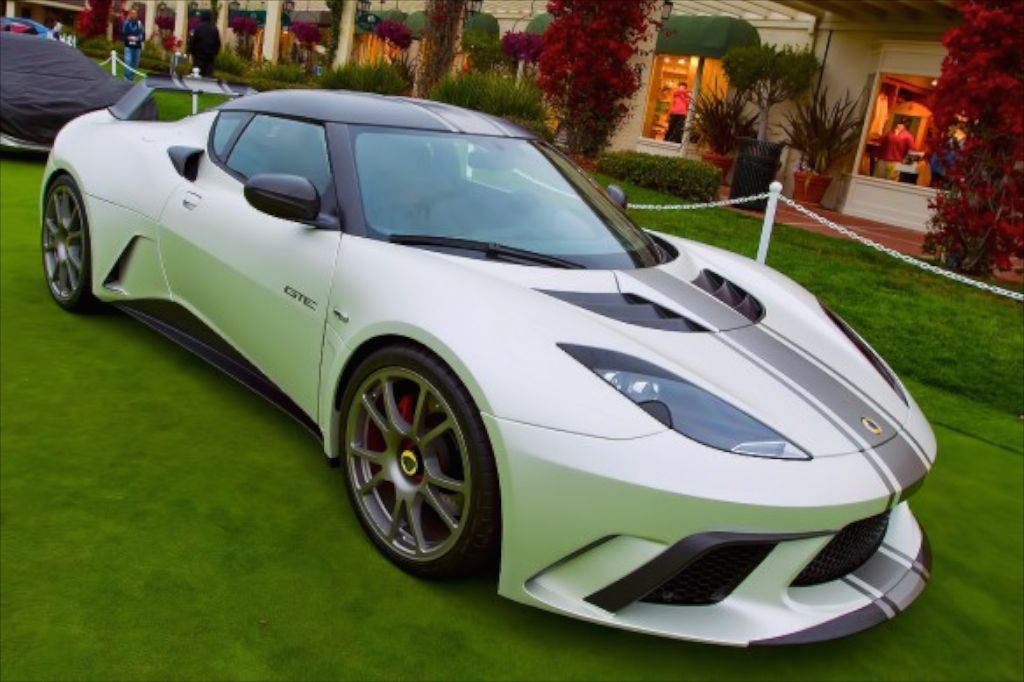 otus Cars USA showed off its Lotus Evora GTE Concept Car on the Concept Lawn at Pebble Beach. The Lotus Evora GTE answers an important what if question. What if Lotus took one of its Evora GT4 Cup racecars and made a street version to offer for sale? Will Lotus come out with the GTE? We're crossing our fingers and hoping that yes, the GTE will be available for the boulevards where ever awesome supercars are for sale.